Place of Origin: Zhejiang, China (Mainland)
Model Number: YEM1L-100
Standard:GB14048 CCC CQC
Application
YEM1E series electronic MCCB (hereafter referred to as simply breakers) are one of the new type breakers which have been developed by the company using CAD/CAM/CAE international advanced design and manufacturing technology. The rated insulation voltage of the breakers is 800V. In the circuit of AC50Hz, rated operational voltage 690V and rated current up to 1250A ,the breakers take the role of infrequent chang-over switching and infrequent motor start-up. The breakers have overload long-time delay inverse, short-circuit short-time delay inverse, short-circuit short-time delay definite, short- circuit instantaneous and under-voltage protection functions so as to prevent the circuit and supply devices from damage.
■ The breakers, according to the rated ultimate short- circuit breaking capacity (Icu), are classified two kinds of types M(second high breaking type) and H(high breaking type).The breakers are of the following characteristics: compact size, high breaking capacity, short arc-over distance and shake proof, etc.
■  The breakers could be installed vertically (upright) or horizontally (transverse).
■ The Moulded Case Circuit Breaker could not be wired adversely 1 3 and 5 can only be connected with supply line,2 4 and 6 can only be connected with load line.
■ The breakers have disconnecting function , its corresponding symbol is shown as
■ The breakers comply with the demands of the following standards:
■ IEC600947-1 and GB14048.1-2006 Low-voltage switchgear and control gear General rules
■ IEC600947-2 and GB14048.2-2008 Low-voltage switchgear and control gear Circuit-breakers and appendix F additional tests for circuit-breakers with electronic over-current protection.
■ IEC60947-4-1 and GB14048.4 Low-voltage switchgear and control gear Electromechanical contactors and motor starters.
■ The breakers have obtained the CCC mark of CQC, and named as" china famous brand" products. 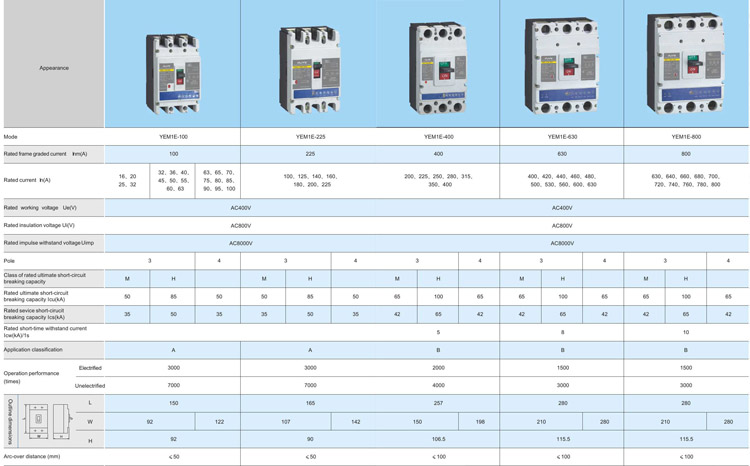