YEM1 series moulded case breakers (hereafter referred to as simply breakers) are one of the new type breakers which have been developed by the company using international advanced design and manufacturing technology.

Application
YEM1 series moulded case breakers (hereafter referred to as simply breakers) are one of the new type breakers which have been developed by the company using international advanced design and manufacturing technology. The rated insulation voltage of the breakers is 800V , suitable for turn-on or turn-off not frequently and starting a motor not frequently in the circuit of AC50Hz, rated working voltage 690V or below (YEM1-63 is 400V)- rated working current up to 800A (YEM1-800 is motor protection-free). The breakers have overload, short-circuit and under voltage protection devices. so as to protect the circuit and the power equipment against damage.

The Moulded Case Circuit Breaker. according to the rated maximal value to short- circuit breaking ability (Icu), would be classified four kinds types C (basic type), L (typica1 type), M (second high breaking type) and H (high breaking type). The breakers are of the following characteristics: compact size, high breaking ability, short arc-overdistance (some of the "0" arc-over distance) and shake proof. They also undergo the tests of nuclear industry conditions (1E grade) and ship conditions, and become the only product using in nuclear industry base among the same products made in the country, further more become the ideal products applied on land or ships.

The breakers could be installed vertically (upright) or horizontally (transverse).
The breaker has disconnecting function, its corresponding symbol is shown as "

■ Ambient temperature:-5℃ +40℃ (If the temperature is between +40 and +60 , please see table 7).
■ Elevation 2000m.
■ Relative humidity: not exceeding 50% at the maximum ambient temperature of +40 .With lower temperature, higher humidity would be permitted, but the lowest average temperature in a month not exceeding +25 during the most moist moth, andthe maximum monthly average relative humidity not exceeding 90% in that month, and giving consideration to the dews on the goods surface, which would appear due to temperature change.
■ Pollution protection:3 grade.
■ Installing categories: Ⅲ for breakers' main circuits, coils of under voltage release and primary circuit of trainsformers; for Ⅱother auxiliary circuits and control circuit.
■ Be suitable in electromagnetic environment A.
■ Be able to bear the influence of moisture in the air or salt fog and oil fog or mould or nuclear industry environment.
■ The gradient ±22.5 .
■ Be working reliably when earthquake (4g) occurring.
Type and its meaning

Note: 1) No code for current distribution,2 means for motor protection.
2) No code for operating directly with handle, P for power-driven and Z for turning handle manually. 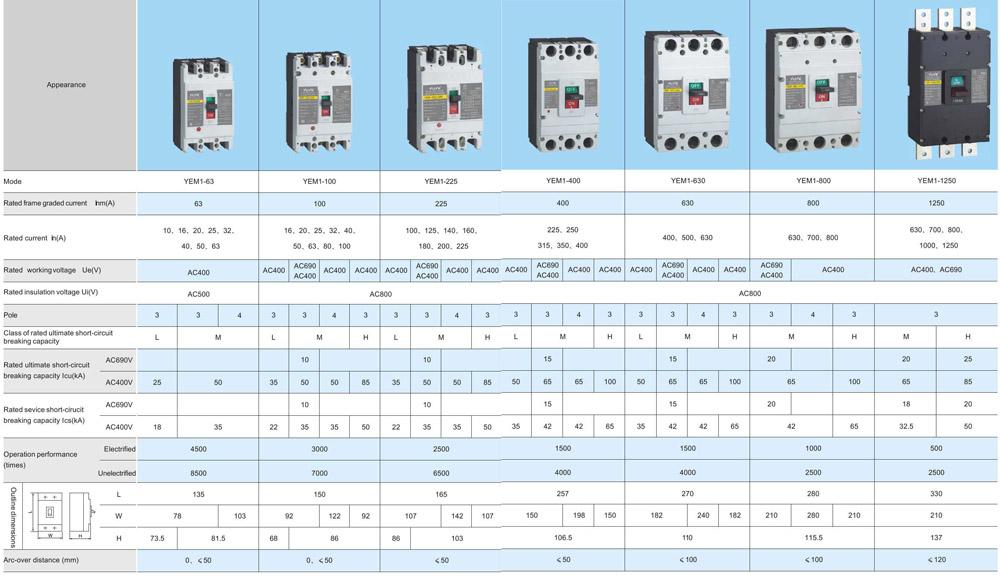